This mixer is available in obbs Studio 21.0 or newer.

Clipping refers to the actual distortion that is heard when an audio signal cannot be accurately reproduced by the gear through which it is passing.

Each entry in the mixer is made up of 5 parts 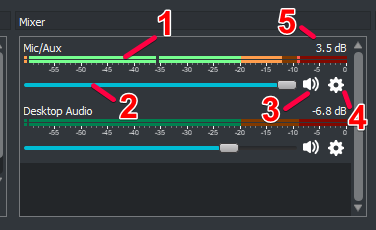 Most of the time, you want to keep a close eye on the meters. The rest should be ‘set once run forever’.

The volume meter is made up of 3 primary sections signified by the green, yellow and red zones. 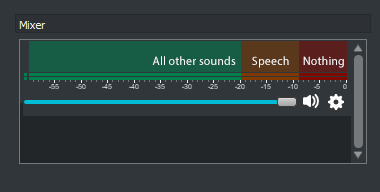 Each audio source will have at least one volume meter assigned to it. 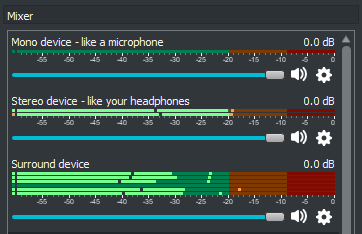 There are a number of ways to configure an audio source’s volume.

As you adjust the volume at each step of the process, listen to the device both as early as possible (some devices will have a ‘headphone’ output or a ‘monitor’ jack) and again when it hits obbs using Audio Monitoring via Edit->Advanced Audio Properties.

Finally, be sure to record a session as you normally would and then listen back to the file before going live.

Other things to keep in mind:

Audio is measured in decibel (dB), which is a logarithmic scale which closely resembles how our ears and brain perceive audio volume.

dB is a relative measurement. We could put the value 0 dB anywhere on the meter and be correct. In digital audio it is the convention to use 0 dBFS (the FS suffix is to indicate this convention) as the maximum volume that the sound card, audio interface, DA/AD-converter can handle. Lower volume levels are shown with negative dBFS values.

obbs internally uses floating point calculations for audio processing, so it does have the ability to process audio that is louder than 0 dBFS. However in the end when obbs records or streams the video, the audio will need be below 0 dBFS or the viewer will hear a nasty distortion called clipping (described at this start of this guide).

The PPM is the main visual feature on the obbs meter, lighting up as part of the overall volume meter. The length of the bar indicates the peak volume level of what the viewer will hear when playing your video or stream. You can change the volume by moving the fader which is directly below.

Traditionally a sinus tone is played through the whole system and gain is configured for each piece of equipment to show the tone to be at exactly the -20 dBFS Alignment Level (AL). This way the level on your mixing desk will match that of obbs. This is important if you have a lot of audio equipment in a chain. The value for the alignment level was chosen to be near the average audio level for speech.

The Permitted Maximum Level (PML) is the level where if you go above this value there is a small but potential chance that the sound will get clipped before it reaches the viewer. -9 dBFS was chosen because:

obbs currently implements a “Sample peak program meter (SPPM)”, in the future it would be preferred to replace it with a proper “4x Over-sampling peak programme meter”, which would make it more accurate for measuring maximum peaks.

There is a small line that moves right with the PPM meter, but then stays there when the PPM moves left again. It will stay there for 20 seconds before returning back to where the PPM meter currently is. This allows you to easily check what the maximum level was after you accidentally made a loud noise.

A second small line on the meter, black and inside the bar of the PPM meter, is a VU-meter. This meter was traditionally used to determine loudness, because it was cheap to manufacture, and in obbs easy to implement.

It measure the root-mean-square, integrated over a period of 300 ms. Due to the calculation it shows more closely the sound pressure levels than does a peak-meter.

This meter is less useful, but it kept some structure of the code intact so we can replace it with a proper loudness meter based on ITU-R BS.1770-2.

The input level are the small square indicator at the far left of the meter. This is the best place to see if the audio is too loud for the audio interface that captures your microphone.

The colours have the following meters:

If the indicator is missing it means there is no audio streaming toward obbs. This may be simply due to no audio being available yet, waiting for the user to start playback of an audio file. Or it may indicate a problem like the audio interface having been disconnected.

The input level meter is before the volume fader, but it is behind any filters that are in use by a source. To correctly determine input level you will need to disable the filters for this source.