A track is like one instrument in your symphony, or one voice in your podcast. You can add more tracks, and all of them will be mixed together to create your final output, but during editing you can manipulate each track independently. If you have an interview recorded with two microphones, each one can go in a separate track. If you have background music, that could go in a third track. You can move the whole track along the Timeline so that it plays at a different point in time in the mix, but until it is split into clips you cannot move individual parts of it around. 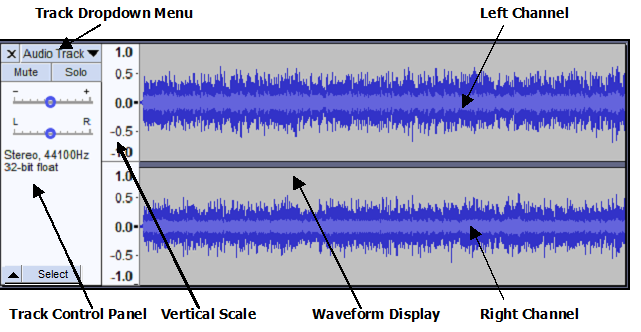 In a stereo track, all editing actions on the track are applied identically to both channels, though some effects may treat each channel differently. For exaample, Effect > Amplify... and by default Effect > Normalize... set the peak amplitude of only the loudest channel then apply the same change in amplitude to the other channel, preserving the balance between channels. Normalize has an option to normalize left and right channels independently to the same amplitude if this is required.

A single audio track has the same components as a stereo track with a single waveform and one vertical scale rather than two. This can be easily seen if using "Split Stereo Track" in the Track Dropdown Menu to split the stereo track into two single tracks. The same menu can make single tracks mono, left or right. Each single track can be separately selected and thus edited independently from other tracks.

The Track Control Panel at the left of the audio track has controls and status indicators for this track. Left-clicking other than on a control performs track selection and move as follows.

Clicking this button will close the track, removing it from the project.

Clicking the track name or using Shift + M on the currently focused track opens the Audio Track Dropdown Menu giving options that affect this track only. Newly created tracks are named "Audio Track". Options in the dropdown menu include changing the name or sample rate, how the track is displayed, splitting a stereo track to single left, right or mono tracks and swapping stereo channels.

Click to play just this track. Click again to release the button. Whenever playing audio, Solo takes precedence over Mute by default - the Mute buttons have no effect whilst any Solo button is down. There are two other options for Solo button behavior in the Tracks Behaviors Preferences. One of these is to remove the Solo button, leaving only a Mute button. The other is more complex suitable for people used to mixing desks, enabling multiple tracks to be "soloed" simultaneously.

Set the gain for this track. Hold down the shift key while dragging to adjust the slider in finer increments. Double-click the slider to bring up a window where you can make precise adjustments or enter a gain value.

To make signal stronger on left or right speaker/earphone. Hold down the shift key while dragging to adjust the slider in finer increments. Double-click the slider to bring up a window where you can make precise adjustments or enter a pan value. 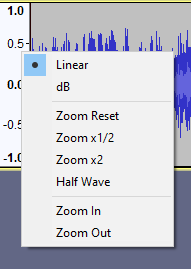 If the display is changed to Waveform dB, the scale shows dB values for positive signals only

You can optionally change the colorway of the waveforms displayed in your project. The setting is per track and not per project so you can have multiple colorways in the same project as in the image below. Four colorways are available with the color selection made from the dropdown menu in the track's Track Control Panel.

For example, here is a project with two mono tracks:

After selecting "Make Stereo Track" from the Track Dropdown Menu on the upper track we get one stereo track: