The terms channel, track and clip can be a little confusing, especially because some applications may use them to mean slightly different things. Within Audiotikal, the meaning is as follows:

2>. Splitting a track into Clips

When you record some audio or import audio from a file, you get a single track. In many cases, there are natural gaps in the audio - silence between sentences or pauses between phrases in music. Those are good candidates for splitting the track into multiple clips, allowing you to move or otherwise manipulate those clips independently. There are eight ways to create multiple clips in a track. As an example, the "before Split " and "after Split" images below show that after selecting Edit > Clip Boundaries > Split, the two boundaries of the gray selection region are overlaid with a solid black split line, marking the boundaries of the three resulting clips.

Unlike cursor points or selection regions, split lines representing boundaries between clips persist in the waveform of the track until the clips are merged or joined back into one clip. An adjacent pair of clips may be "merged" into one clip by clicking on the split line to remove it. You can perform a similar "join" action without a mouse by selecting across one or more split lines then using Edit > Clip Boundaries > Join to remove the split lines so as to make one clip.

To move clips around independently, use the Time Shift Tool

. When you click on a clip and drag it to the left or right, this is called time-shifting because you are changing the time at which that audio will be heard.

, then use the Time Shift Tool to click and drag within the selection region - all selected clips will move together (see before and after figures below). 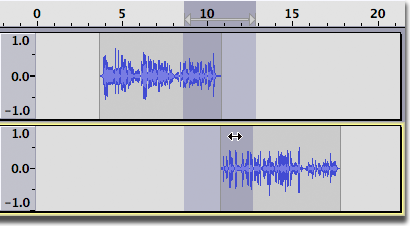 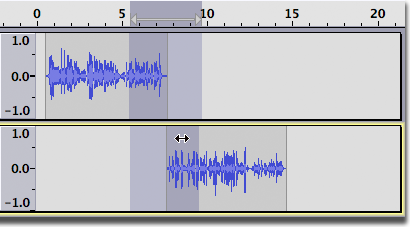 When you time-shift a clip in this track, both channels move simultaneously.

However, there may be times when you will have a stereo track containing separate clips in each channel. Here we see two mono tracks with multiple clips in each track.

After selecting "Make Stereo Track" from the Audio Track Dropdown Menu in the upper track, we get this.

Here we have positioned the Time Shift pointer over the first clip in the left channel of the stereo track.

After dragging with the Time Shift tool, the first clip in the left channel has moved independently of the clips in the right channel.

5>. Moving a Clip Between Tracks 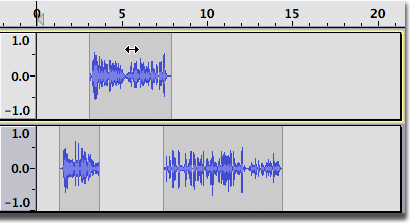 The clip does not fit between the two clips in the second track. 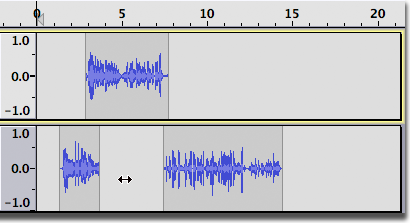 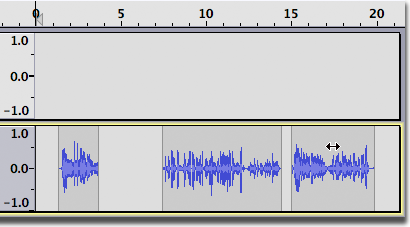 A Clip takes on the selected color of the waveform that it originates in. When a clip is moved into a different colored track, the clip retains its original color. 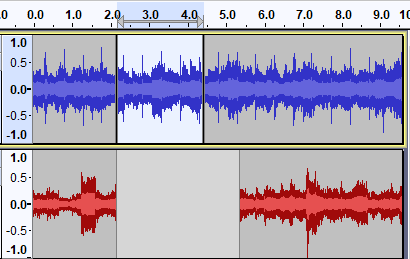 Blue clip in the top track with sufficient space in the bottom, red track 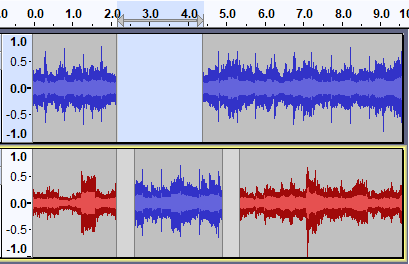